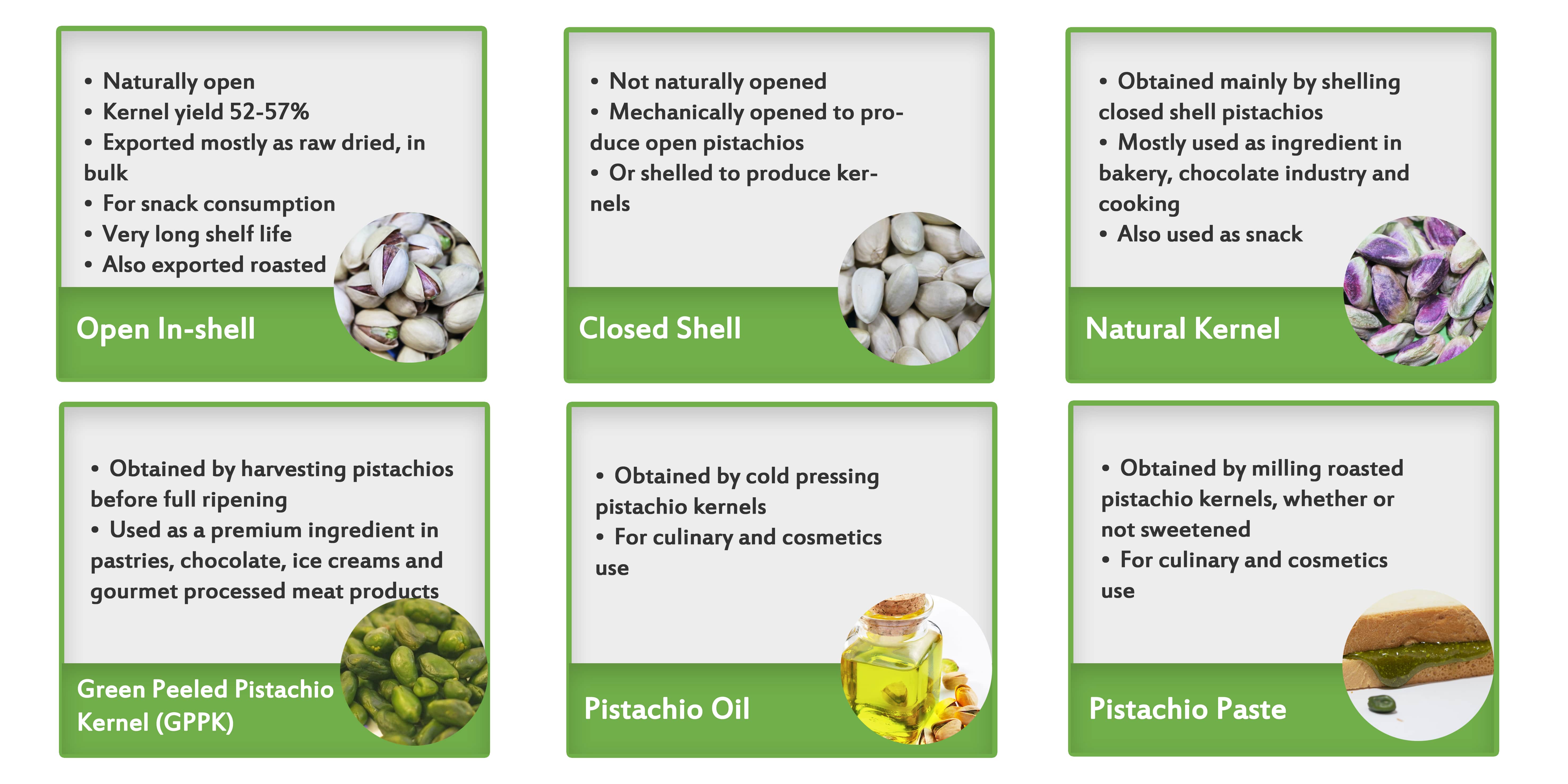 The following is a description for each of the Iranian pistachio products:
Naturally Open In-Shell Pistachios: Used purely as a snack, it is roasted in-shell. Open in-shell pistachios are mostly exported as raw dried, in bulk. Raw dried pistachios have a practically unlimited storage life, if stored in relatively dry conditions (only fumigation is needed). Kernel content is about 54-59%, depending on variety and annual fluctuations.
Roasted pistachios are also exported. They also have a long shelf life as long as they are vacuumed or nitrogen flash packed.
On average, over 110,000 tons of naturally open in-shell pistachios are exported from Iran each year, with a market value of around USD 900 million. The top five markets for this product are: the Far East, the Middle East, the EU, CIS countries and the Indian subcontinent. 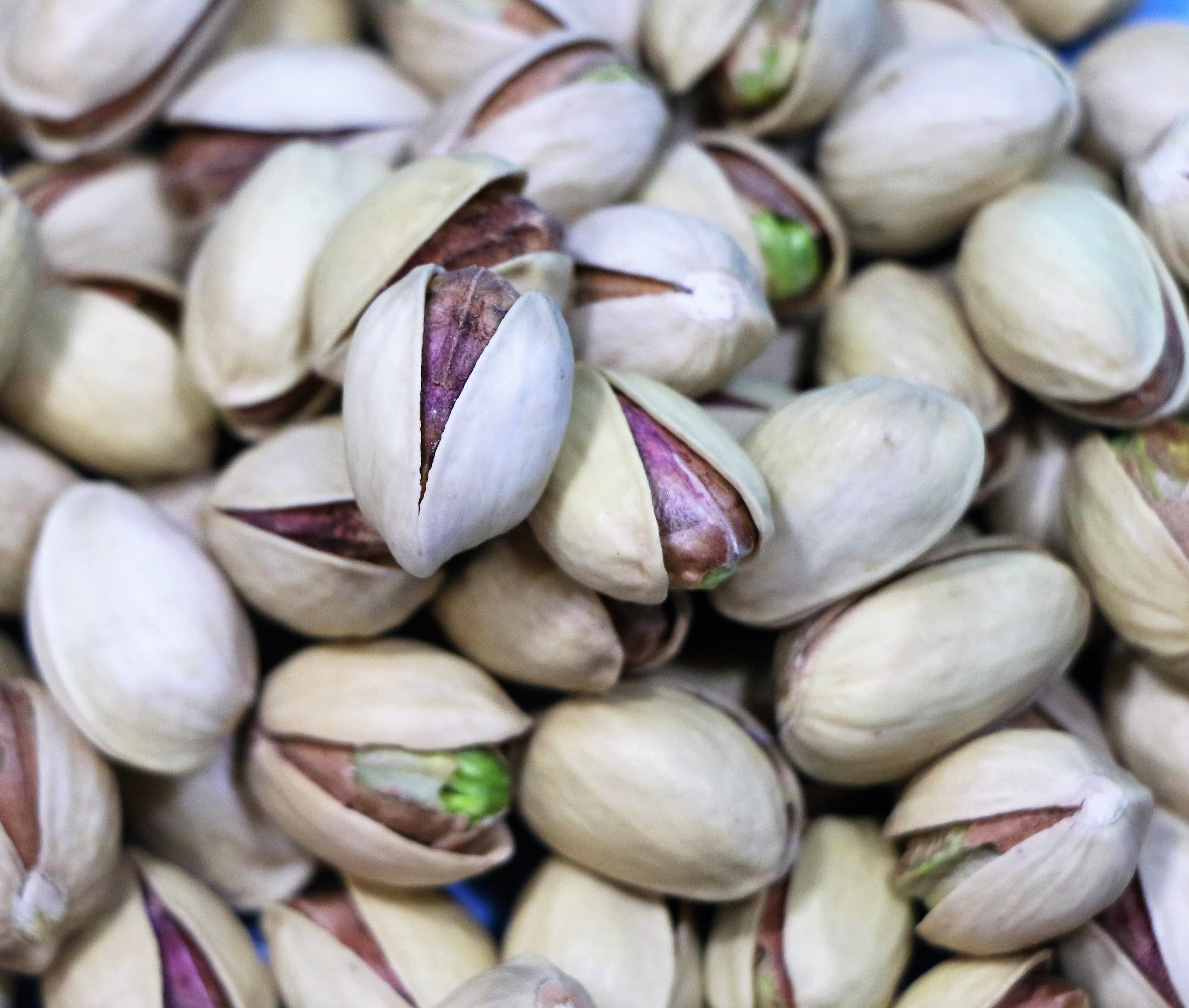 Mechanically Opened (MO): These are closed shell pistachios that have been mechanically opened along the suture of the nut to look similar to the naturally open pistachios. The difference with naturally open pistachios is a lower kernel weight to in-shell ratio (kernel content). Good quality MOs can have kernel content of 49-50%. MOs are used as snacks.
On average, over 10,000 tons of mechanically opened pistachios are exported from Iran each year, with a total value of about USD 80 million. The top three markets for this product are: the EU, the Middle East and CIS countries.
Closed Shell: These are pistachios that have not opened naturally (on average 20% of the crop  varying by variety and crop year). Closed shell pistachios go for further processing, i.e. shelling, to produce natural kernels or are mechanically opened.
On average, 15,000 tons of closed shell pistachios are exported from Iran each year, with an estimated total value of over USD 100 million. The main market for this product is the Far East. 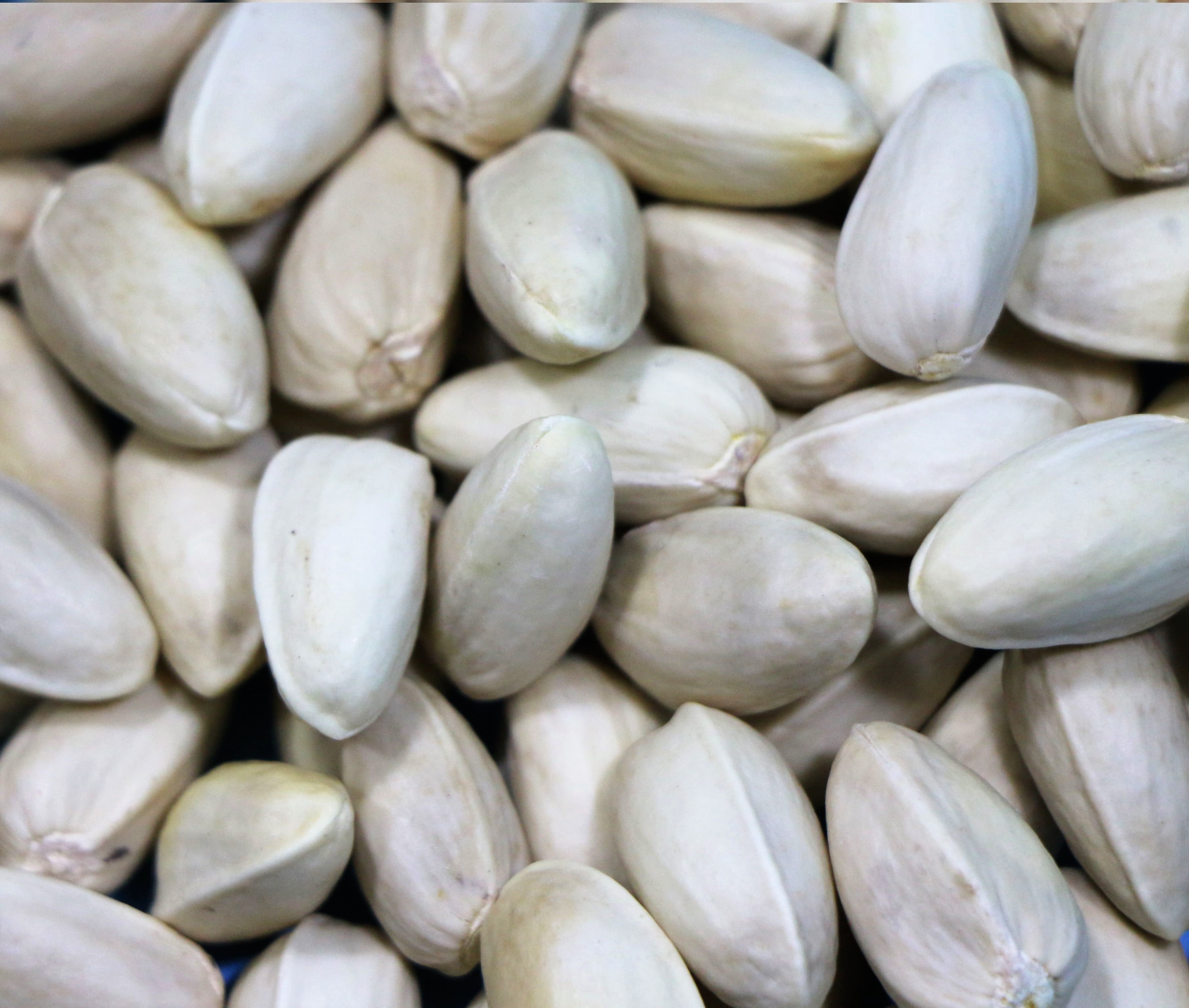 Natural Pistachio Kernels: These are obtained by shelling closed shell (as well as very rarely open in-shell) pistachios. In contrast to cashews and peanuts, pistachio kernels are not usually used as a snack, but more as a food ingredient, used in bakery products, the chocolate industry, and cooking. Buyers of this product, normally, look for suppliers who clean kernels from shell pieces and other foreign material to a level of 99.999%.
On average, around 18,000 tons of natural pistachio kernels are exported from Iran each year, with a total value of over USD 260 million. The top three markets for this product are: the Middle East, the EU and the Indian subcontinent. 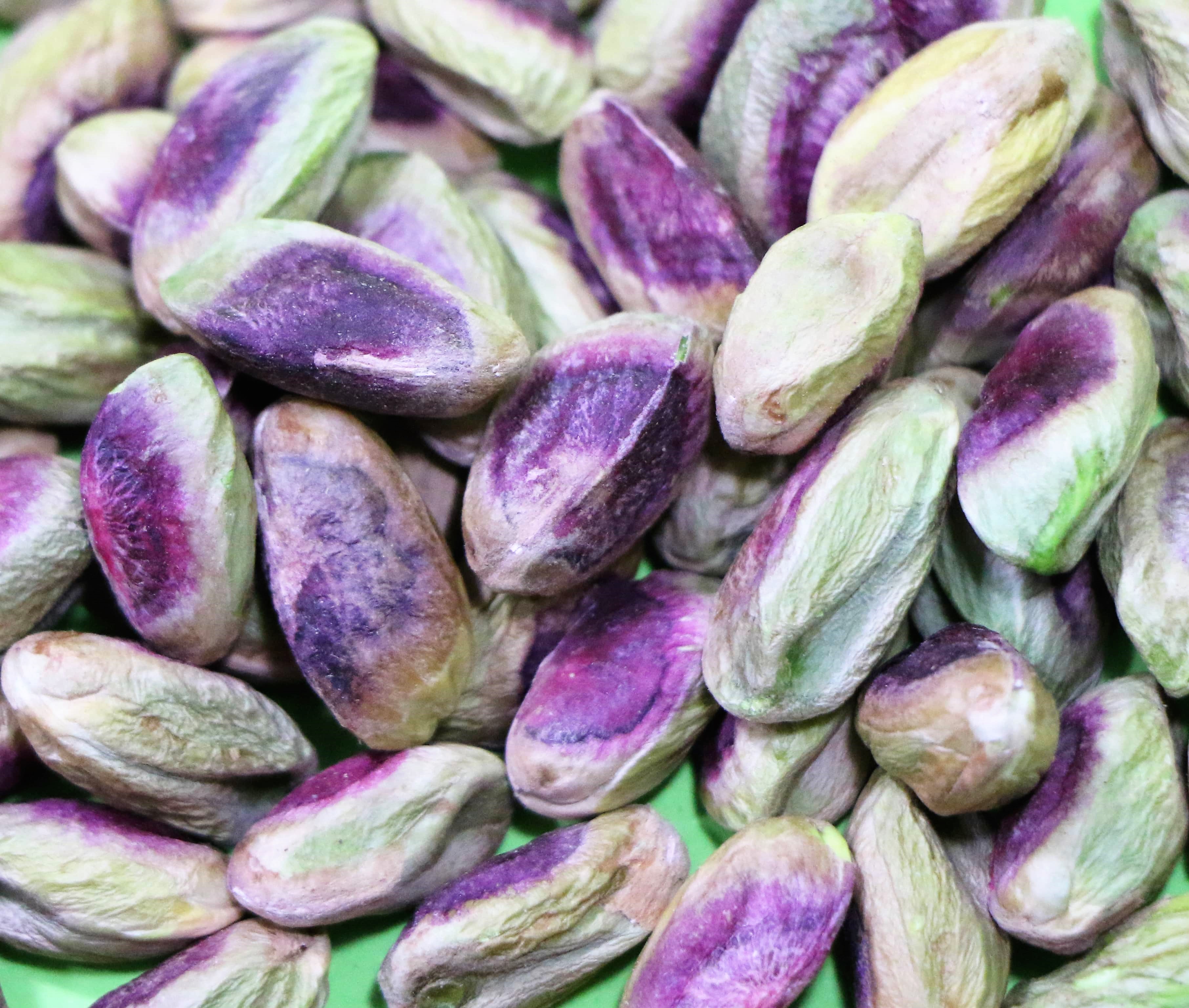 Green Peeled Pistachio Kernels (GPPK): In Iran, this product is obtained by harvesting pistachios before they are fully ripe, so that the green hue of the kernel has not turned yellowish. These pistachios are dried in the sun (heated air drying is not allowed) and shelled. The kernels are dipped in boiling water before the softened seed coat is mechanically removed. The peeled kernels are then dried and sorted according to the intensity of their green hue. Normally, whole GPPKs are sorted to four grades of green colour. The market gives premium prices to the more intense green coloured kernels.
GPPKs are used as food ingredients in pastries, chocolates, ice creams and sausages, where a small quantity of the green kernels gives an aura of luxury and distinction to the product. In most cases (with the exception of ice cream and marzipan products), green kernels are not added to enhance taste, but rather used very sparingly to show that the special food item has quality and distinction.
Close to 3,000 tons of GPPKs are exported from Iran each year, with a total value of around USD 100 million. The total export market size for this product has had a fast expansion rate from a few hundred tons in the late 1980s to about 3,000 tons in recent years. The top three markets for this product are: the EU, the Middle East, and Japan.

Two products derived from pistachios are pistachio oil and pistachio paste:
Pistachio Oil: This oil is derived from pressing pistachios. It consists mostly of monounsaturated (cholesterol-free) vegetable oil much like olive oil. It contains a percentage of omega 3 fatty acids, which reduce the risk of heart attacks. Pistachio oil is presently used in salad dressings and in cosmetics.
Since aflatoxins are not soluble in oil, even nuts showing higher than acceptable levels of aflatoxins can be used as the raw product to derive oil from the nut. This nut oil can be filtered through a hydrophile medium to remove all traces of aflatoxins, which are soluble in water. This means that as aflatoxin regulations become stricter, more and more quantities of pistachio oil will have to be produced. In the not too distant future, Iran needs to produce at least 5 million liters of pistachio oil, annually. 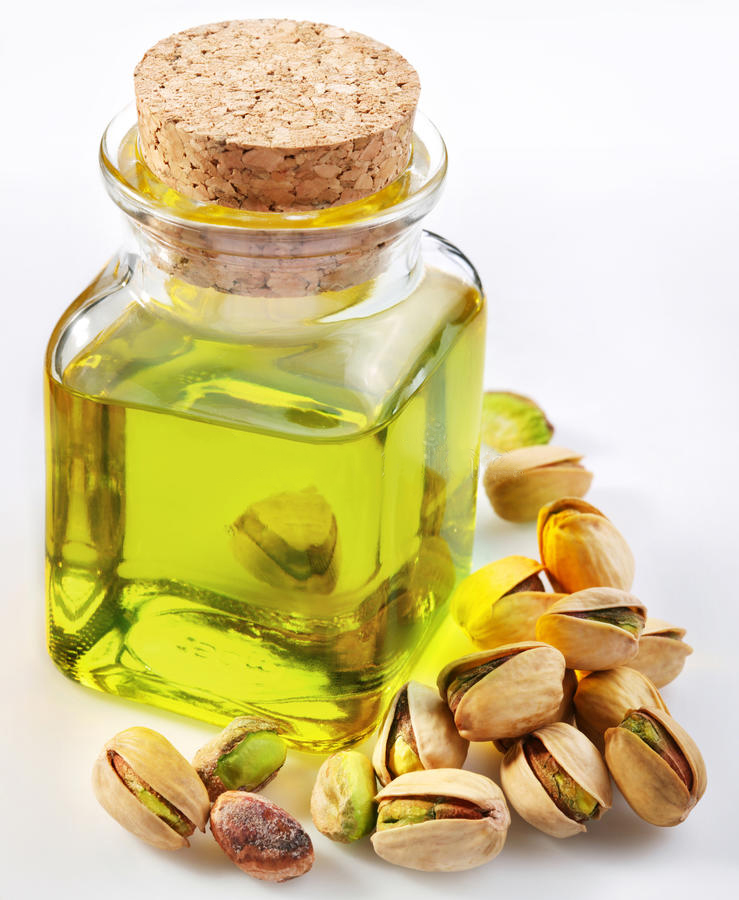 Pistachio Paste: This is roasted milled pistachio kernels which may have been sweetened. Pistachio paste can be used in pastries or as a spread.

There are no comments posted here yet